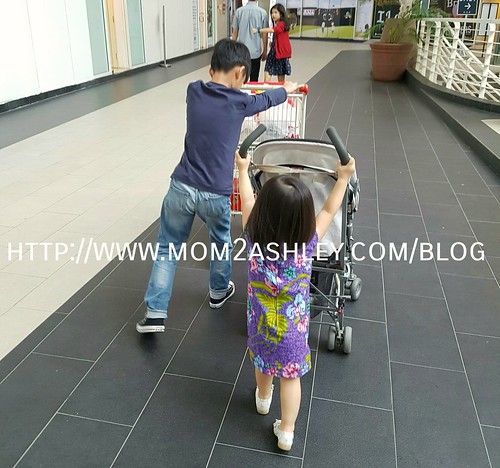 We are truly blessed that both Ashley and Aidan are very loving and caring towards AK. No jealousy whatsoever. Just pure love. To be honest, if I were to compare between Ashley and Aidan (I know I know I should not be comparing them but the Asian mother in me cannot hold back), Aidan seems to have more patience with AK. There was only a handful of times where I witnessed Aidan losing his temper with AK. 99% of the time,  he has been very  accommodating to AK’s demands. Sometimes she’s grumpy and throws tantrums but  Aidan would just take it all in. Ashley on the other hand doesn’t take much crap from AK. She is more of a disciplinarian compared to Aidan and she is the one who doesn’t 100% give in to AK. Which is good in a way. There is balance. Yin and Yang.

These kids of mine have changed me. I used to be very uptight about how inconvenient certain things would be e.g. if AK were to freely push the stroller, then it’d be difficult to look after her in public etc (yea yea I was uptight like that). But the kids have taught me to throw a positive light on things.

For example, when Ashley and Aidan were babies, when they threw a fuss before I sat them down on their respective car seats, I’d get all worked up stressed out. There was a lot of power play involved too now that I think of it. With Amelie, I just went with the flow of things.

No stress about her not taking her afternoon naps. Just sleep earlier in the evening and it worked out really well for us too.

No stress if she doesn’t want to wear the clothes I planned for her to wear. Just don’t plan it. With less expectation, you’d have less disappointments.

No stress when she doesn’t want to eat or drink her milk. It just means that she is not in the mood. We adults are like that sometimes too.\

No stress when she wakes up in the middle of the night crying. There’s always a reason if she cries since she cannot fully express herself in words.

Parenting. It’s an ongoing journey. The moment I think I have everything  worked out, the kids throw a curve ball. So as a parent, we need to be agile and learn to adapt. It’s fun. Challenging at times but  so rewarding and such a privilege.