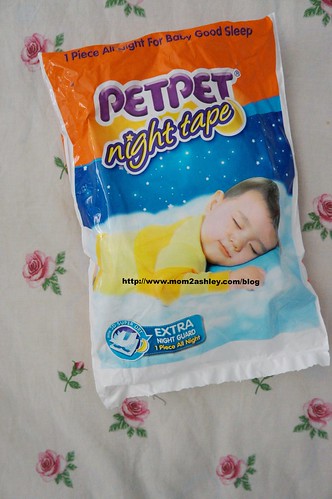 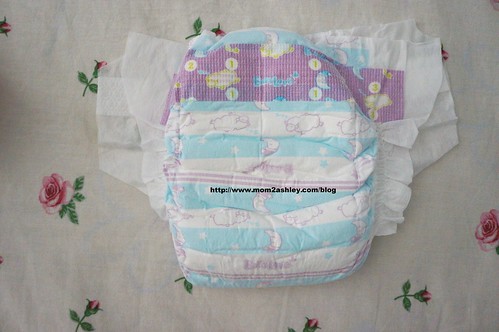 5 years ago, we thought we could kiss diapers goodbye when Aidan weaned off them. But little did we know that we had to start buying diapers again 5 years down the road! Before I gave birth to AK, I did  a poll in a group I am associated with on which diapers their own kids were using and why they chose them and I came to a conclusion that PETPET diapers are really good value for money.  The only thing I was concerned about was how the diapers would last AK throughout the night because I remembered that both Ashley and Aidan peed alot at nights causing their diaper to overflow. And that’s when I was introduced to PETPET Night Tape. It is Malaysia’s 1st revolutionary over-night diaper designed with extra night absorbency technology which is made up of 3D super dry sheet which speedily drives urine into the pad core and prevents backflow. I’ve only heard of night time sanitary pads but now, there are night time diapers! This saves us the trouble of having to change AK’s diapers at nights.  So thankful that so much research and technology are invested into diapers alone!

These are some of the pros of the product after letting AK use it when she was a newborn.

1. The PETPET Night time diaper was wider than the normal PETPET diaper which was super because to me, that meant less leakage and the diaper can hold more pee 🙂

2. The diaper is soft to the touch so I am assured that it’s comfy on the little missy

3. The waist band is extra stretchable which hugs onto AK’s waist better assuring an extra fit and comfort while she sleeps at night.

4. The PETPET Night Tape diaper is definitely value for money. It retails at RM38.90 per mega pack (S66, M60, L50, XL44) and is available at all leading hypermarkets and supermarkets in Malaysia since August 2014.

1. I would like to point out that although the PETPET Night Tape diaper has extra leak guard with additional soft leak protection against side leakage, there were once or twice where I noticed there was a leak and it was usually on one side of her waist. The diaper was not full and heavy but I could not figure out how it leaked on the side of her waist.

The cons far outweighs the pro and AK is still happily wearing them till today.